I once audited a class at Stanford.

The year was 2007. I was in the midst of a startup (Graspr.com – an attempt to create a ‘howto slice’ of Youtube), yet I was intrigued enough to take that class.

It was no ordinary class.

Dr. BJ Fogg, a psychology professor and Director of the Stanford Persuasive Technology Lab, was offering a new (possibly one-time) course – Psychology of Facebook. Fogg’s recent claim to fame was his earlier class (Building Facebook Applications) which he co-taught (I think with Dave McClure). That class produced many apps that reached millions of downloads within weeks and I think a few went on to become companies as well.

For this follow-on (Psychology of Facebook) course, Fogg wanted an industry mix in his classroom and made interested participants fill out a brief questionnaire. I must have contributed something insightful (or witty) because I was ‘accepted’.

It was quite a fascinating course and something that warrants a separate post (short version: I ended up reading Robert Cialdini’s Psychology of Persuasion in about 3 sittings). Suffice to say that after class got over, I kept regular tabs on Dr. BJ Fogg and Persuasive Lab’s work. 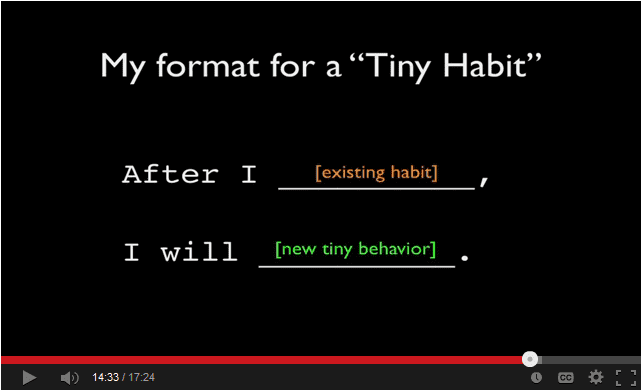 A few years later, after we had moved to Bangalore, I learnt about his latest innovation around behavior change – Tiny Habits. I promptly signed up for his remote 2-week Tiny Habits workshop. The essential principles around this innovation were:

If you are like me… as in struggling to balance insane work pressures, spending quality time with your spouse and kids, and holding on to that one rhythmic act of sanity restoration (running/squash/yoga/dancing/[something]) and you want to extract 30 min more per day? Forget it, it ain’t gonna happen.

What may be possible is to find six anchor points during the day.. create and sustain 5-min duration tiny habits.. and if those tiny habits do sustain, coalesce a few of them into a 15-min routine.