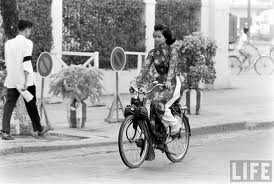 Saigon has a curious aspect. It is a rather shabby version of a French provincial city – say, Toulouse, as I remember it. Life proceeds normally and it has the most stylish women in all Asia. They are tall with long legs, high breasts and wear white silk pajamas and a white silk robe, split at the sides to the armpits to give the effect of a flat panel fore and aft. On a bicycle or scooter they look very compelling and one is reminded once again that an ambassadorship is the greatest inducement to celibacy since the chastity belt. 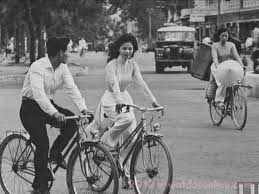 Restaurants, nightclubs and hotels flourish as they seem always to do in cities in extremis. Yet one moves around with an armed guard and a group of gunmen following in a car behind. The morale of the Americans seems to be rather good although I wonder a little bit about our technical assistance program. The people assigned to the country are confined almost exclusively to Saigon since travel has become too dangerous. I can’t imagine that the agriculturalists, for example, are of much value under these circumstances. The Ambassador there, a decent man who is trying to obey orders, has been treated abominably by the State Department. He first heard of Max’s mission on the radio. I would reluctantly tell you who is responsible for this management were steps taken to overcome my natural grace and charity.

The above extract is from a Nov 28, 1961 letter — from John Kenneth Galbraith to President John F. Kennedy — a few weeks after Galbraith’s visit to Saigon. This, and many other interesting stories, recounted by Galbraith in Ambassador’s Journal about his tenure as US Ambassador to India.